It appears this blog is going to be indirectly involved in a libel lawsuit between blogger Pete Talbot and blogger Greg Strandberg, so let me explain how this all started.

On December 5th I posted my reaction to news that Melissa Romano’s husband, Eric Lehman, was busted in August for possession of drugs, including LSD, cocaine and meth. On December 7th, at 10:27pm, Pete Talbot posted a comment and I responded the following morning, since I wasn’t up late fuming about politics like Talbot was. Here’s the screenshot of the comment:

It was this exchange that Strandberg picked up on when he wrote a post, titled Attack the Messenger. Here’s is the potentially libelous commentary Strandberg put up at this blog:

In the past 24 hours, I’ve had 3 negative comments on this site from angry Democrats, two of them from out-of-state.

I’m not the only one – over at RD, it’s the same story. There we saw a likely-drunk Pete Talbot giving a piece of his mind. Even heard Aaron Flint mention this on his radio program this week.

Is speculating on the “likely” state of inebriation of a commenter libelous? I guess that will be something for the courts to decide. Here is Talbot’s comment on Strandberg’s post:

Is there any reason for Strandberg and myself to be speculating on the state of mind of Pete Talbot as he lashes out at the bloggers writing unflattering political analysis of his preferred political candidates? The answer to that is yes. First, here’s a screen shot of Talbot’s blogger bio, in which you will note he likes bourbon enough to include it in the brief bio:

How about Strandberg? Does he have any reason, besides Talbot’s avowed love of bourbon, to suspect Talbot could be posting comments while drunk? As it turns out, yes. Here’s an excerpt from Strandberg’s post, Blogger Vs. Blogger:

A few weeks ago, Pete came into my bar and sat down right in front of me while I was working and had two stiff drinks while talking politics with his friend. I watched him miss a few steps as he headed toward the door. That was around 10 PM.

Hmm, that’s interesting. I sure hope Pete Talbot didn’t operate a motor-vehicle that night, because operating a motor vehicle while under the influence is illegal. Just ask Eric Lehman. 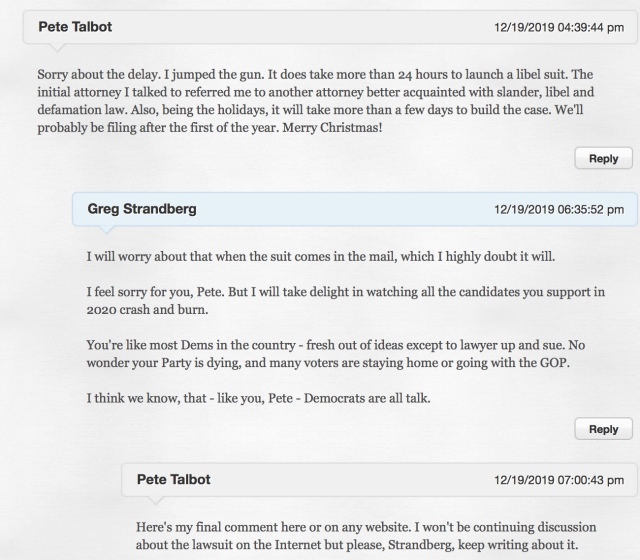 If I was Stranderg I would seek legal representation pronto, someone like Quentin Rhoades, and I would consider a countersuit, since Strandberg has been depicted as an anti-semite, unfairly, in my humble opinion, by the writers of the Montana Post.

Litigation is a serious step for Talbot to be taking, one that Strandberg shouldn’t take lightly. It takes money to fight this shit in court, and Strandberg has, from his own reporting, not a lot of financial resource to bring to bear against this escalation. He also has his kids to think about.

At a time when people are thinking about the holidays and family, it’s really quite sad and pathetic that Pete Talbot is preparing to sue a lowly blogger with young kids. If I get sucked into this, obviously I am going to be limited in what I can write about until this bullshit works its way through the courts.

I'm a poet and political cynic living and writing in Montana. You can contact me here: willskink at yahoo dot com
View all posts by William Skink →
This entry was posted in Uncategorized. Bookmark the permalink.